Members of AAS have been volunteering on rock art recording projects since 1967. Over the years, we have worked at sites all around central New Mexico. In 2009 an AAS group teamed up with the BLM to record rock art on public lands. We work with the Albuquerque, Socorro and Farmington districts. The crew goes out to record every week, weather permitting, year round. As the photos will demonstrate, crew members need to be in good hiking condition. The team is currently at full capacity and not seeking additional volunteers.

Recently Gretchen Obenauf reported that the BLM has instituted a new award to commemorate the 50th anniversary of the National Historic Preservation Act. Gretchen nominated our rock art crew, and they have won the very first Heritage Heroes award. It was noted that one of the reasons that they received the award was that they did not just do the “fun stuff”; they submitted complete reports on the rock art they recorded.
Dick Harris reported on the activities of the rock art crew. The weather has been cooperating, and the group was able to go out on three out of the last four Tuesdays. They are currently working on a site in the Socorro district; one more week should finish that site. Then, as the weather warms up, they will move to sites farther north. Carol Chamberland remarked that the rock art group never runs out of sites to investigate. Gretchen Obenauf added that anyone who knows of a rock art site on BLM land that might be unknown to the BLM should inform one of the rock art crew about the site. 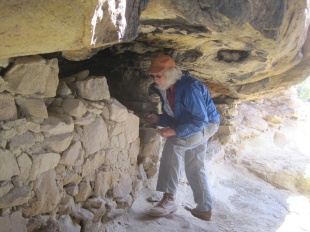 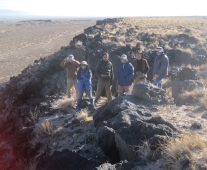 We advocate preserving archaeological and other cultural resources, informing members and the public about archaeological and ethnological subjects through our meetings, presentations, newsletter, other electronic media, field trips, volunteer efforts, field surveys, and studies.

The Albuquerque Archaeological Society meets at 7:30pm on the 3rd Tuesday of each month (except in August) at the Albuquerque Museum. Our meetings are free and open to the public.